Robotics does not only refer to assistive devices used in industry. Robotics can also be utilized in more everyday tasks, and that´s what Robotics Academy students were commissioned to find out. A group of students started researching the possibilities of using UR5e collaborative robot at a café, especially in making coffee and waffles.

Group members Pietari Pulkkinen, Jukka-Pekka Rajahalme and Timo Virtanen started the project by collecting all the necessary equipment to create a demo café. An old Moccamaster coffeemaker was found on the campus, and the commissioner provided the group with a Belgian waffle iron, a real “Mercedes Benz” in the field. For the robot to work smoothly in the kitchen, the group had to design and 3D-print auxiliary devices suitable for a finger gripper, e.g. a new handle for the coffee pot.

Once the demo café was completed, programming the functional features of the robot was a smooth operation for the group, and the robot carried out the tasks brilliantly. Among the industry-centred projects, making waffle was a nice and tasty change. Besides, having coffee has always belonged to the life of engineering students.

Based on the demo, the students believe that the UR5 collaborative robot is well suited for tasks at a café.

– UR5e is suitable for simple and repetitive tasks at a café. Besides the tasks conducted in the demo, the robot can be used for e.g. spreading dough with suitable tools, pouring different drinks, cutting cakes and pies, and decorating cakes, Pietari Pulkkinen lists.

The case was commissioned by Hangon Vohveli and its owners Aarno and Leena Törmälä. The commissioners were happy with the cooperation, and they intend to employ the robot in café tasks at their café.

– Working with the students was a pleasure. They were self-starters and really aimed at finding a functional robotized solution for making coffee and waffles at our café. Our intention is to realize the robot solution, if not yet next summer but at a later stage. Besides functionality, it will be a nice sight for the customers and we can all learn the kind of assistive tasks the robots are already capable of, Aarno Törmälä tells us.

This robot experiment was carried out as a part of the HLS robo project, which has been granted co-funding from Rural Development Programme for Mainland Finland 2014 – 2020. 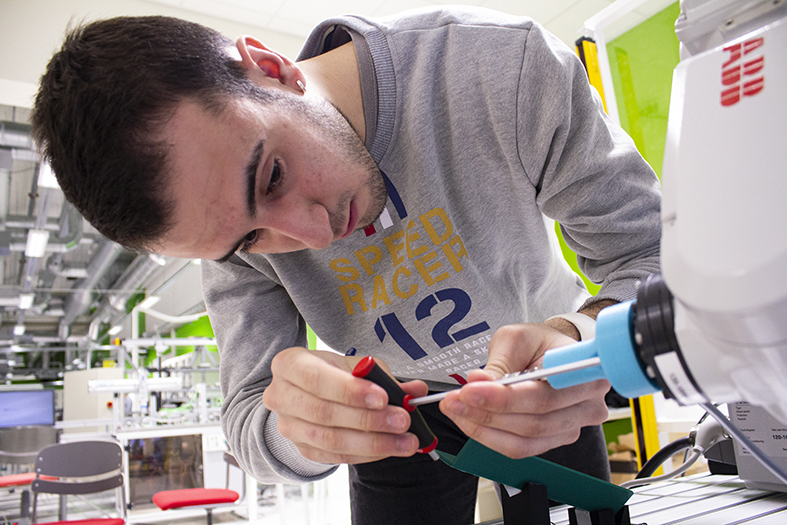 Read more about the academy studies