The 5VTA project supports the growth potential of food SMEs by providing a pragmatic, five-step model. See the case examples and observational videos.

The 5VTA project recognizes the importance of small and medium-sized food companies in our society and highlights the needs to improve the competitiveness of the companies in the sector, among others, improving the cost efficiency of production and optimizing the use of energy. The joint project between Satakunta University of Applied Sciences and Seinäjoki University of Applied Sciences ended in the summer and the results of the project were published on the website in October 2019.

The project focused on the operation, production, degree of automation, energy efficiency, enterprise resource planning and development plans of 21 food SMEs. Based on the information, policies were identified, evaluated and modeled, enabling the SMEs in the sector to leverage new technologies to improve their cost-effectiveness and competitiveness. Finally, a model of five impressive technology steps was developed, which help the companies to begin developing their production.

5VTA in a nutshell:

– The steps of the five impressive technology steps don't have to be taken in sequence or all at once, but in the best suitable order and schedule for the company. The main thing is to develop the right things, Mirka Leino, Principal Lecturer and Project Manager, reminds us.

One example of the 5VTA project was the Pekan Parhaat Bakery’s packaging line automation plan. During the design process, it was explored how cutting and packing a bakery product could be possible and what costs the different levels of automation would bring about. A thesis of the automation plan was also conducted by Jenni Alatalo, a student at Satakunta University of Applied Sciences. Read more and watch the videos of simulations.

See also other case examples of the 5VTA project. (in finnish) 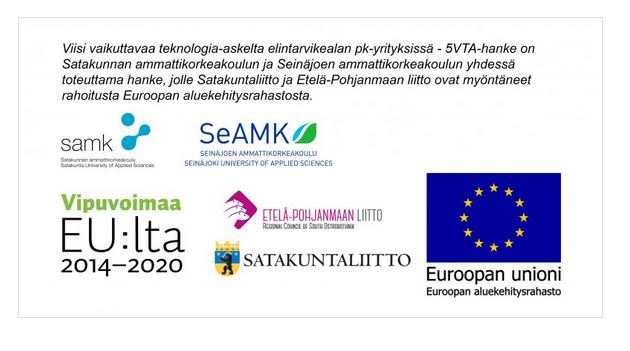 We Research: What does our brain tell us?